At Cervus, we use ‘Warfighting experimentation’ (WFE) to support decision making about military capabilities and to develop innovative doctrine.

Most recently we have been capturing the majority of our observations and data via Training Data eXploitation (TDX). The term ‘war-fighting’ means that the experiment involves military personnel in an appropriate operational environment.

Collective Training environments, in such locations as Kenya and Canada, best replicate the frictions and complexities of combat, which are difficult to generate on trials or in the synthetic environments.

This means that we deploy teams into the field, to work alongside and observe the organisation we are studying.

We have been using this information to better understand either: the current military capability; or potential changes to the capability (e.g., new equipment or doctrine). The information collected is used as evidence in MOD Business Cases justifying investment (e.g. to support procurement of new equipment) or as a component of capability development (e.g. developing new operational concepts and testing them through WFE).

Classically the system engineering ‘V’ diagram is used in Force Development to show the relationship between the different activities undertaken to define and build a capability. This is the ‘accepted’ pathway for capability development. 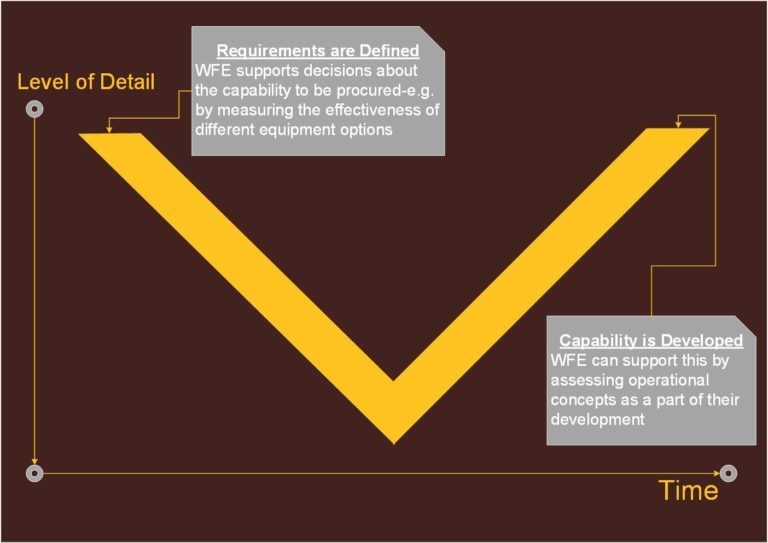 However, we believe that the reality of the situation is often more complicated than this systems approach. What tends to happen is when equipment is procured driven by other imperatives and without sufficient consideration of the other Defence Lines of Development (DLODs). What then happens is that the ‘V’ illustrated becomes a double ‘V’ in which there is additional refinement of the requirements even after the capability development has begun or the equipment is delivered.

So, rather than working in the perfect ‘System V’, we are actually working in an imperfect ‘Wonky W’.  Therefore, because of this perception of ‘perfection’, funding tends to focus on delivering the equipment DLOD, rather than accepting that it is imperfect and that other DLOD levers will need to be called on to enhance the overall effectiveness.

It isn’t all bad new as these other levers are owned by the end user (i.e. in the Front Line Commands), rather than the acquisition organisation (i.e. DE&S). The minor changes can be rapidly effected by those who understand how the capability will be used but it is difficult for them to understand how hard to push on each of the levers within their control. 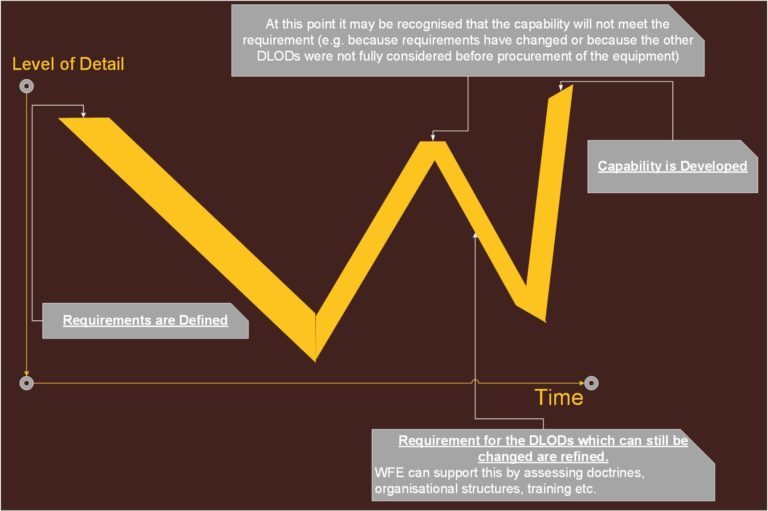 The difficult question is the extent to which defence capability development will change to accept that this is an imperfect process. The UK is about to bring in a host of equipment into service (AJAX, MORPHEUS, Warrior 2, Challenger 2 LEP etc) within a short time span. We think it can be done, but it will need a change in mind-set and a reminder about pan-DLOD approaches to funding.

Engineers seek perfection – the end user accepts chaos.  Is it time to change the way we do our business ?

If you are interested in continuing this conversation, why not get in touch.