Is that your Avatar, Paddy? Creating a Virtually Extended Office for The Future

How did we get here?

It probably goes without saying that like many, we at Cervus have found the last 14 months to be arduous. In particular, we have been challenged in making the transition to home working, and to keeping a growing team engaged, productive, and happy. In the initial period of lockdown, there was an element of novelty, grappling with how best to maximise the potential of all the obvious collaboration and distributed productivity tools: Outlook, Teams, Sharepoint, Slack, Zoom, Confluence, Jira, Google Meets and more.  We made mistakes, learnt from those mistakes, and by the autumn of 2020 were reasonably proficient and delivering our work well in these tools, as well as becoming increasingly fatigued by a working life lived solely through 2D screens.

Through the same period, we had the privilege of being closely involved in the British Army’s largest investigation into the utility of Virtual Reality (VR) for Army training, as part of a team led by NSC (QinetiQ), and including Bohemia Interactive Simulation (https://www.bisimulations.com/), the developers of the Army’s principal virtual simulation system VBS3 and VBS4.  This meant that concurrent with improving our own distributed and remote working practices, we were working daily with a very representative set of the best VR headsets in the consumer and professional domains: Oculus Rift, HTC Vive and Vive Eye Pro, Varjo and so on.  In addition, we were being usefully exposed to Army experiments on training in a distributed manner, consistent with the immediate needs of force protection during a pandemic, but potentially also opening avenues to new, and more cost effective ways of training in the future. Much of this work focused on the training itself, the networking of trainees in disparate locations, training together in VR etc. But apparent to us is a sense that perhaps not enough effort has been focused on how to leverage VR to plan, rehearse, and then learn from this training.  From this experience we identified that we could learn valuable lessons from this in considering how VR could contribute to our business achieving its objectives and creating new ways of working together.

So what did we do about it?

Putting these threads together, having a more informed view of emerging VR collaboration and enterprise platforms and an idea of its potential, in December 2020 we decided to buy everyone in the company an Oculus Quest 2. This is, in our view, the best value for money, tether-free headset on the market. It’s not perfect, and the technology is already racing ahead, nonetheless it’s not an investment we regret. We have always tried to commit to making ‘small bets’, small investments in technologies or software, of whose ultimate purpose we aren’t certain, but in which we can see promise.  That very much guided us in this instance.  We didn’t initially give anyone any guidance at all – just that the team should explore the Oculus app store, play games and look out for collaborative or productivity platforms.

So – where are we now? Well – we have experimented with a number of the most well-known platforms.  We would single out Spatial (https://spatial.io/) and Glue (https://glue.work/) as two of the very best collaborative platforms that we have thoroughly enjoyed playing with and ‘in’.  Immediately prior to Christmas we held a full day’s workshop conducted in VR using the Glue platform.  This was a long day, that flew by, and would not have been as productive, as creative, or as fun in MS Teams.  We have also attended workshops held in VR using VR Engage (https://engagevr.io/), with participants from East and West Coast in the US, Ireland and the UK, and which culminated in a breakout session on Mars! We’ve also briefly explored 3D VR analytics visualisation platforms such as Virtualitics (https://virtualitics.com/) which are also very exciting, but fit a more specific and narrow niche.

The results of all of this are that we have now decided to make a more extended commitment to Arthur (https://arthur.digital/), a platform that has particularly impressed us and that fits well with our ways of working.  We can whiteboard, post-it, run break-outs, build models, integrate with Jira, OneDrive, give presentations, stream media, share and interact with 3D models; we can pull everyone into a communal space, and still allow quieter one to one conversations to take place in the same room out of earshot of anyone else. This world gives us as many virtual rooms as we like for as many different purposes as we can imagine – and we at Cervus certainly have lots of imagination! 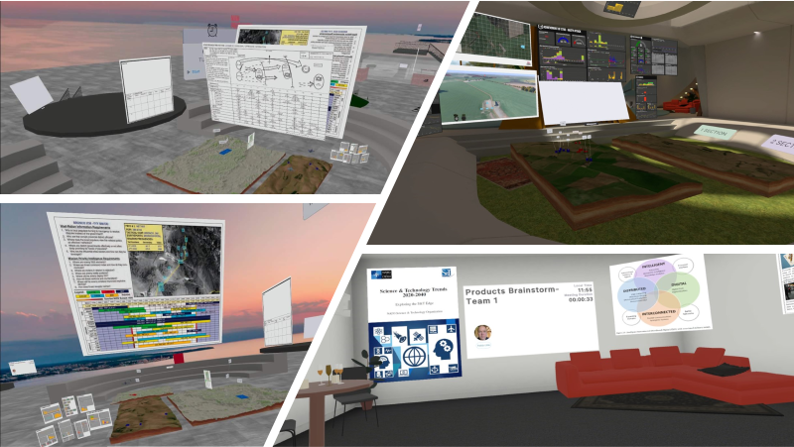 Cervus see the future workplace as a hybrid, but one that is not simply a hybrid of physical presence in the office and a 2D presence through MS Teams when working from home. We think that VR may well add another dimension to the optimal working environment we are looking to get to; one that may be as relevant in the office or at home, complementing the physical and the 2D. We believe that there are opportunities for unconstrained creativity, innovation and ideation that may be even better realised in VR than they ever could physically. Our hope is to create an environment in which team members feel more confident expressing themselves than in the flesh. We are all certainly imagining individual, team and project spaces, all bespoke and role specific, and always environments that we can and will bring other external collaborators into, to illustrate better the early conceptual stages of our thinking.

So, to round this up, we look forward to seeing more of you in person, as well as in 2D in the “normal” or conventional fashion – but perhaps also seeing some of you in VR! We might be wrong in this, and we’ll let you know if that’s what we conclude; but, for the moment, we believe that as a digital enterprise it’s important to take the plunge, to take some risks, and see where we get to.  The possibilities look endless…